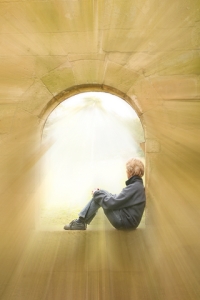 There were no locks on the interior doors of my childhood home. Our family of six lived in a tiny two-bedroom house on the edge of Brooklyn in what had been a beach community of bungalows until the soldiers returned from WWII to settle down. The only privacy I had in that house full of rage, mental instability, and alcoholism was in my head, and the only lock available was on the door to my heart.

I was married for eighteen months when I was watching a TV news magazine with my husband asleep in bed next to me. The program was about adult survivors of incest and how the trauma impacted their lives. I grew increasingly agitated as I listened intently to the conversation. Words blurred together as emotions overwhelmed me. Memories rapidly surfaced and I struggled to push the images out of my mind.

At 24 years old I realized that I’d been sexually molested by my older brother.

I didn’t sleep that night, or for many nights that followed. While I was never comfortable with the ‘sexploration’ my brother imposed on me uninvited when I was ten, I had no words to describe or label what had taken place. It shouldn’t have come as such a shock that I had completely buried the experience so deeply in my memory. But it did.

I stopped the encounters by telling my brother that he could not touch me any more. Still, I felt complicit in the experience. As he became more aggressive and insistent in his pursuit,  the sick feeling in the pit of my stomach consumed me. Each time I heard the bathroom door hinge squeak or the bedroom floor creak with his approach, I burrowed deeper into myself.

He was assigned my caretaker. Our mother believed having the two older boys keep an eye on the younger two would help her manage all of us. It seemed logical that the oldest would take care of the youngest, ten years his junior. And with only five years between us, the second oldest would take me under his wing.

My oldest brother was a bookworm — using words to paint pictures or cut us younger kids down with what became known as his ‘silver tongue’. And while he challenged my mind and spurred me on to learn beyond my years it was under my other brother’s influence, that my imagination and creativity thrived. I adored him. The less competitive of the two older boys, he was both funny and fun, with a sharp sense of humor and the ability to turn routine events into entertaining stories. He could draw anything and everything, from the Sunday comics to a whole world dreamed up in his imagination. He influenced my love of art and science fiction, and I loved being his sidekick.

When I put a stop to his advances, all of that came to an abrupt end. He wouldn’t look at me nor would he speak to me, yet he continued to shower his undivided attention on my only friend who was flattered by his charms. It was a dangerous game he played. I worried that he would hurt her and yet, there was a part of me that was jealous of the attention he lavished on her. But the silence grew louder and I was all but dead to him. I couldn’t ‘tell’ because of the fallout on the family. And he counted on that.

So began my exile into the shadows, emerging occasionally with only my mask for protection.

The effects of the abuse reverberated over time with the debris of its wake washing up on the shores of my life as feelings of shame and unworthiness surfaced at unexpected moments, triggered by seemingly unrelated experiences. I blamed myself for whatever instigated my unworthiness, unaware of its source. I believed I was defective, inherently WRONG. Once realized, the truth remained concealed from all but those closest to me. But it was difficult for them to support and encourage me when even I didn’t fully understand the depth of my experience.

As of this writing, which I drafted but wasn’t ready to release more than two years ago for the “Heal My Voice” project, I am finally at peace. The path that brings me here has been rich and bountiful. I am no longer a victim or martyr, enabler or rescuer. In their stead, I know forgiveness and healing, compassion and courage… and more love than I could ever have imagined.

And I am grateful.

Find out more about the Heal My Voice Project at:  http://healmyvoice.org

View all posts by donnacerame

11 thoughts on “from exile to emergence”